Sure, owning a home, driving the same car for 20 years, and forgoing daily coffee purchases can help you build wealth. But of all the financial choices you can make, the one with the most impact, by a long shot, is not having a child or having one fewer than planned.

It also turns out to be the best move for the environment.

Given the social and emotional value placed on family, that can be hard to hear, but if you’re undecided about the idea of parenthood, understanding the environmental and financial costs can help inform your decision. Here’s what you should know.

While it doesn’t receive a lot of media coverage as a savvy environmental move, not having a child is the most effective single decision you can make to reduce your carbon footprint. The second-best alternative, living car-free, isn’t even close. That’s according to Canadian research published in the journal Environmental Research Letters.

The graphic below shows the annual carbon savings from the highest-impact activities: 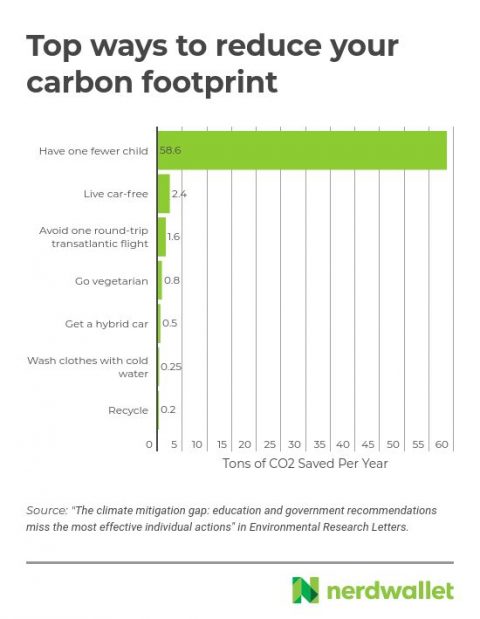 To put this in more perspective, you’d have to fly back and forth to Europe 36 times per year to have the same carbon impact as having one child. Other options such as recycling, going car-free or eating vegetarian also have little impact in comparison.

The economic cost is just as striking. The Department of Agriculture estimates that it costs nearly $234,000 to raise a child born in 2015 through age 17 — and that figure doesn’t include the cost of college. More importantly, this number doesn’t factor in what that money would compound into over time if invested elsewhere.

The average cost of child-raising amounts to between $12,350 and $14,000 per year. Let’s be even more conservative, however, and use the average for lower-income families, about $10,000 annually, or nearly two annual maximum individual retirement account contributions. So what would one child cost in retirement savings over a 35-year career, assuming these 17 years’ worth of savings were plowed into the stock market? 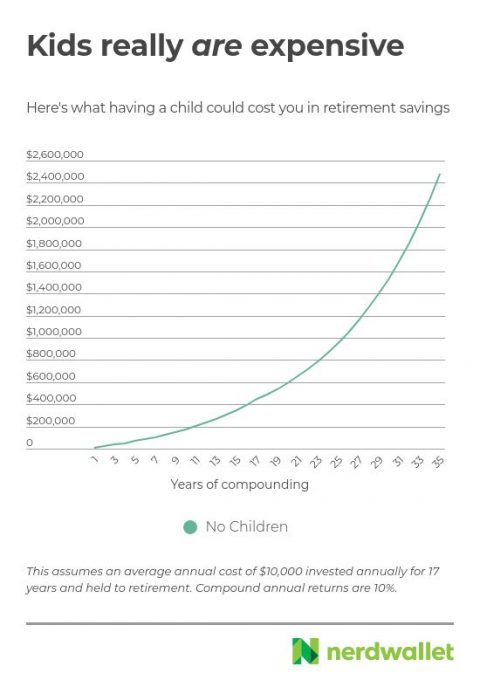 These results are shocking: The cost to your retirement of having a child could top $2.5 million. That’s how much you could have in 35 years if you had invested that $10,000 annually. This assumes 10% annual stock returns, with compounding — right at the market’s long-term average.

Still want to have kids? When it comes to maximizing your retirement savings, you have three options: delay, delay, delay — because you can roll up a nest egg in the interim. There are, of course, other factors to consider if you’re deciding when to start a family, but the more time you give your investing snowball to grow, the smaller the overall hit to your retirement 35 years out.

Looking to save some money on that child? Here’s how to minimize expenses and maximize savings.

The article Your Best Financial Move Is Also Best for the Environment originally appeared on NerdWallet.