We looked at the top Coffee Percolators and dug through the reviews from some of the most popular review sites. Through this analysis, we've determined the best Coffee Percolator you should buy.

Update as July 23, 2020:
Checkout The Best Coffee Percolator for a detailed review of all the top coffee percolators.


In our analysis of 123 expert reviews, the Farberware Stainless Steel Yosemite Coffee Percolator placed 7th when we looked at the top 11 products in the category. For the full ranking, see below.

Brewing coffee on the stovetop extracts a fuller, richer flavor, and this Farberware 47053 Classic Stainless Steel Yosemite 12-Cup Coffee Percolator is ready to brew four to twelve cups of your favorite blends. Farberware has been trusted for over 100 years, and this stainless steel percolator continues that tradition for a new generation. The heavy-duty stainless steel is polished to a mirror finish for a classic touch and the sleek and traditional look fits in with any kitchen decor. A comfortable handle with iconic styling offers a confident grasp and is designed to provide a balanced grip while making coffee or pouring delicious French roasts or flavored coffee blends. A non-reactive coffee maker interior keeps water from absorbing any undesirable odors or tastes. And, with a permanent percolator filter basket, there’s no need to deal with messy paper filters. A tight-fitting lid seals in heat and the sturdy, see-through glass knob lets you know when percolating begins and ends. Fully immersible and dishwasher safe, this percolator makes a great addition to any of the Farberware collections. Get back to basics, and enjoy more flavorful coffee, using the Farberware Classic Series Stainless Steel 12-Cup Stovetop Percolator.

Affordable. Among the best of the traditional coffee percolators. Works well with all heat sources: electric, natural gas, propane.
- BestReviews

| Full review
It's made from stainless steel and is both submersible and dishwasher-safe.
- Get A Coffee Maker

| Full review
Is able to brew up to 8 cups of coffee at a time and comes with a heat resistant handle for safety.
- Kitchen Aria

| Full review
While the exterior ensures safety and style, the non-reactive interior stops formation of unpleasant taste or odor by preventing absorption of water into the material.
- Food Shark Marfa

| Full review
Another important feature is the sturdiness of the product. All the internal parts remain relatively stable — nothing bent on the journey or rusted after use.
- My Family Tent

| Full review
It has a polished stainless steel exterior, a black handle that stays cool, and a glass top knob so you can watch the coffee as it brews.
- The Spruce Eats

| Full review
No need for a paper filter, cutting down on camping waste
- Camping Cooks

| Full review
It can prepare around 4-8 cups of rich, high quality coffee, and uses a permanent filter basket, which means you no longer have to be hassled by disposable filters.
- Brown's Coffee

| Full review
It has a unique spout that’s simply a hole in the side with a spout to funnel the coffee into your cup, but that makes it easier to clean if you don’t have a dishwasher.
- Kitchen Sanity

| Full review
The lid is well designed for a nice, tight seal. You can look through the top of the clear plastic knob.
- My Daily Morsel

| Full review
The interior is non-reactive, which means it won't absorb any odors or tastes. So your 100th pot should be just a great as your first.
- Little Coffee Place

| Full review
This pot is fully immersible and dishwasher safe. So, you can just pop it in the dishwasher and forget about it till the next use.
- Boat Basin Cafe

Percolating coffee manually has a steep learning curve, so close supervision may be required.
- BestReviews

| Full review
No Ready-Light
- Get A Coffee Maker

| Full review
Does not come protected by any kind of warranty but is still very cheap to buy.
- Kitchen Aria

| Full review
The knob on top might loosen up a bit after regular use.
- Food Shark Marfa

| Full review
Do note that you may have to avoid letting the finished brew sit for too long, since there will be no constant heat to keep your drink warm, unlike with electric percolators.
- Brown's Coffee

| Full review
But what the percolator doesn’t feature is an indicator light.
- Koobie's Coffee

| Full review
The name and styling indicate that you could use it in a campfire, but that would void the warranty if the pot became scorched.
- Kitchen Sanity

| Full review
For some reason, this product can ship out with inconsistent knob materials. They usually seem to be plastic, but occasionally are glass.
- My Daily Morsel An Overview On Coffee Percolators

Whether you use it to kickstart a busy morning or ease into a lazy Sunday, coffee is seen as one of the simple pleasures of life. But increasingly, it seems like everybody’s favorite brew is anything but simple to make. Browse the kitchen section of any department store website and you’ll find everything from high-priced K-cup espresso makers to artfully-designed pour-over rigs that look like something out of a mad scientist’s lab. Perhaps it’s predictable that some coffee lovers have joined a sort of mellow rebellion against all this java snobbery by embracing older methods of brewing. And when it comes to brewing coffee, there are few methods older or more satisfying than the percolator.

Among coffee making methods, the percolator has a well-deserved reputation for quick brewing, and strong, bold tasting results. On the downside, it’s easy to come out of the process with burnt and bitter coffee if you let it brew too long. For some, that allowance for a personal touch is part of the appeal. In a nutshell, percolators function by heating water to such a degree that it becomes steam, traveling up through a tube into a filter section that contains ground coffee. In more traditional “gravity” percolators, the steam then cools back down into a liquid state, infusing itself with coffee while dropping through the filter into a lower chamber to begin the process again. In more modern “pressure” percolators, that steam keeps on rising into an upper chamber to complete its transition into liquid coffee. As you might imagine, that process is easy to overdo, especially in the case of gravity percolators. That’s why such units typically come with a glass topper, where you can watch the coffee bubble up. The “blurp” noise it makes as the coffee reaches its optimal state is one of the most satisfying sounds a coffee lover can hear.

A word about versatility: One of the main advantages of having a percolator is that the basic mechanism can be used anywhere that you have access to heat and water. Stovetop percolators are the basic units that consist of the pitcher, filter and lid, and they are just as effective on a kitchen stove as they are over a campfire. You can also get electric percolators, which add a heating element underneath the pitcher. That makes it a bit less portable, but there’s a lot to be said for having a reliable way to keep the coffee warm after brewing it. You can expect to pay a bit more for electric units, but on average, the relatively low price of percolators is another big “perk” over other coffee makers. 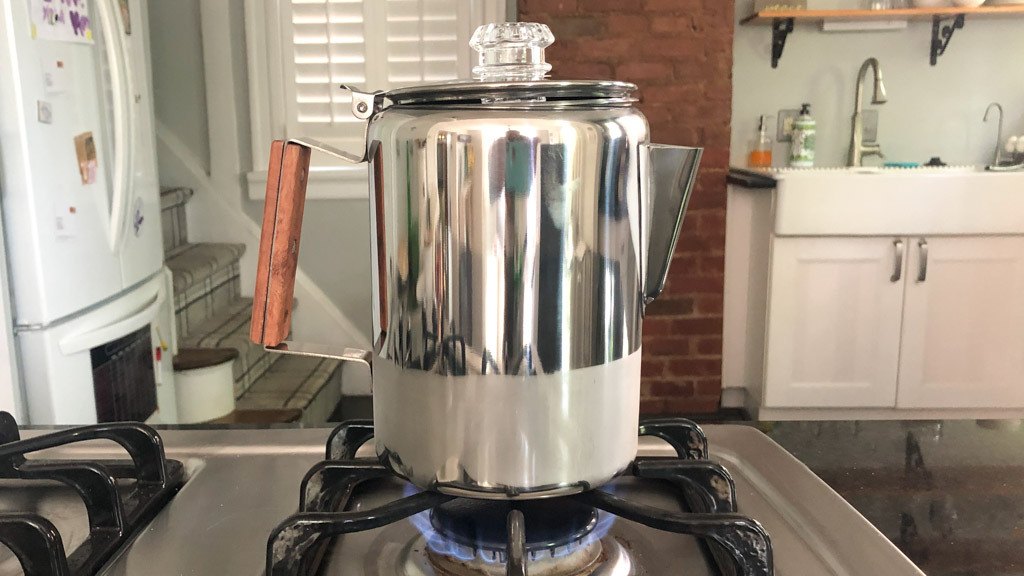 You’ll want to keep in mind that percolators do need to be cleaned, and in most cases you can disassemble and clean the entire thing in the dishwasher. (This might not be the case with electric models.) That generally includes the filter section. Unlike most other brewing methods, percolators don’t need a paper filter, though some newer models allow you to insert special disc filters or other ways to accommodate finer grinds. Finally, consider capacity. If you’re brewing for an entire family, you can expect a percolator to brew a consistent strength of coffee whether it’s one cup or 20 – provided your pitcher can hold that much. And though percolator brewing is one of the fastest methods, keep in mind that it will take longer to bring a large pot of water to a boil.

How much coffee do you need per cup? The ratio is the same for electric percolators as it is for stovetop models: Use roughly one tablespoon of ground coffee for each cup, adjusting to fit your personal taste. Keep in mind that percolators effectively “double-brew” your coffee, so it will be a bit stronger than normal. And if you grind your own beans, definitely go with a coarser grind. Percolator coffee filters have larger holes and the grinds will get plenty saturated, which means it’s easier for grounds to slip through into the coffee if they are too small.