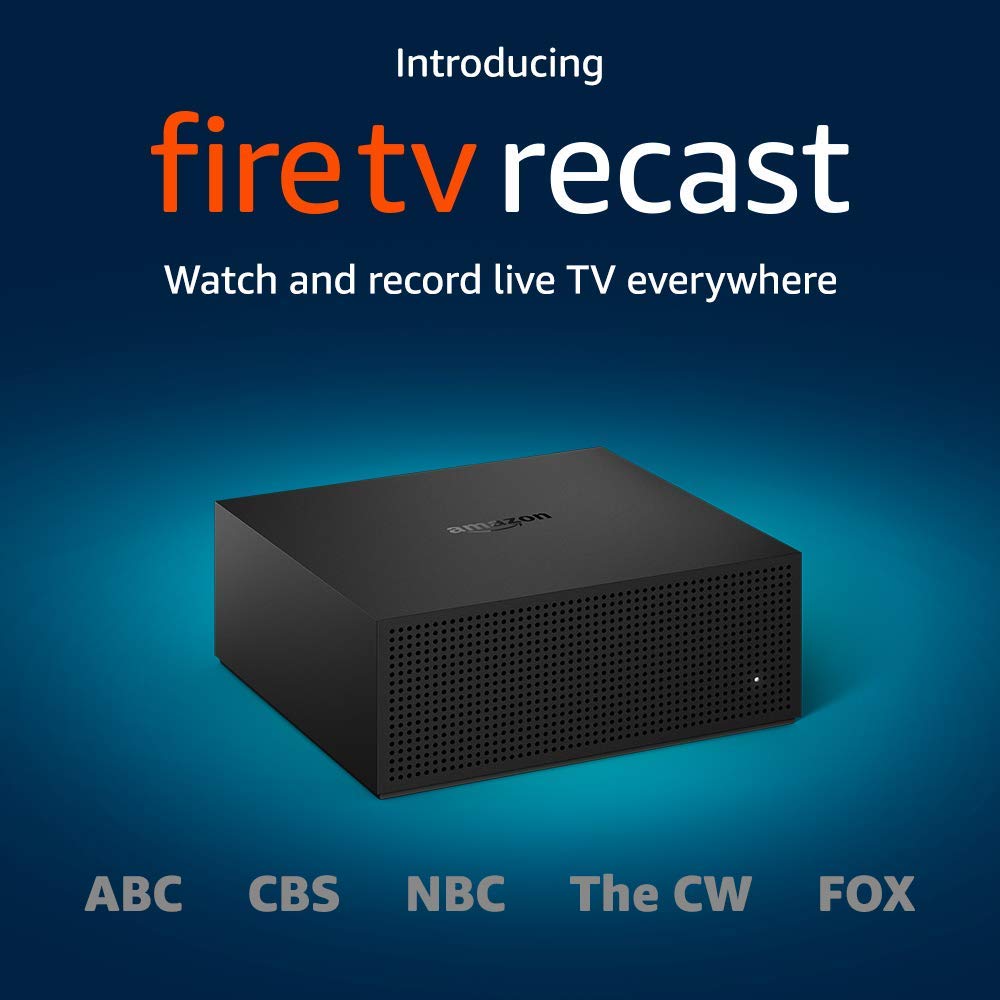 We looked at the top DVRs and dug through the reviews from some of the most popular review sites. Through this analysis, we've determined the best DVR you should buy.

Update as November 29, 2021:
Checkout The Best DVR for a detailed review of all the top dvrs.

If you already use an Amazon Fire Stick, this DVR offers a subscription-free way to view and record OTA content. It offers simple setup, as well as seamless integration with your Amazon Alexa device. Search functionality covers all shows, live or streaming.


In our analysis of 55 expert reviews, the Amazon Fire TV Recast placed 1st when we looked at the top 11 products in the category. For the full ranking, see below.

Fire TV Recast is designed so that you can place it, together with the digital HD antenna connected to it, anywhere in your home (even in a different room or a different story) to optimize for antenna reception. As part of the set-up process in the Fire TV mobile app, we will tell you which direction to place your antenna to get the most channels for your location. It is recommended to place your antenna as high up as possible, against a window or outward facing wall that has a clear line of sight to your surroundings.

The Fire TV Recast also works with Alexa voice commands, so you can use the Fire TV voice remote or an Amazon Echo speaker to launch live channels, play your recordings, open the channel guide, delete recordings, and check on storage space.
- TechHive

| Full review
Initial setup takes only a few minutes after deciding where you want to put it. The Recast doesn't need to be near a TV -- there isn't a direct connection between the box and your TV.
- ZD Net

November 14, 2018 | Full review
This being an Amazon product, you can use Alexa to open the channel guide, schedule recordings and find programs by title, actor, genre and more. Doing so will display results not just from over-the-air programs, but from streaming services as well.
- Tom's Guide

| Full review
Setup is straightforward. Using the Fire TV Recast app for iOS or Android, you connect the box to your WiFi network – if you’re not using wired ethernet – and log in with your Amazon account. After that, it automatically scans for whatever channels are available.
- Slash Gear

| Full review
I like the Fire TV app for iPhone and Android. With it, you can stream the live broadcast TV shows, view recordings, or record TV shows from anywhere.
- CNBC

November 29, 2018 | Full review
The Recast takes that premise and makes it even easier. No accounts to create. No monthly billing for guide access. No external hard drives to deal with. You just buy the thing, plug it in, set it up, and start watching (and recording) on an Amazon Fire TV device, on an Android or iOS device, or on the Amazon Echo Show.
- Cord Cutters

The Fire TV Recast’s biggest drawback is that you need a Fire TV device to watch on televisions. Recast is incompatible with non-Amazon media-streaming devices such as Roku, Apple TV, Chromecast, game consoles, and most smart TVs.
- TechHive

| Full review
It's not like switching inputs is a ton of work, but it is an inconvenience. Not only does that mean keeping your TV remote around for changing OTA channels, but switching to your antenna input lacks any sort of programming guide, and, perhaps most importantly -- it lacks any DVR functionality.
- ZD Net

November 14, 2018 | Full review
It's more expensive initially than many antenna TV options. You need a Fire TV device attached to your TV, and can only watch on two devices at once.
- CNET

| Full review
If you’re using the Fire TV mobile app, you’re a bit more limited in what you can do here. You can start and stop recordings, but there’s no scheduling. I also found some of the interface to be unnecessarily fiddly and unintuitive, which is hopefully something that Amazon will improve on as the app matures.
- The Ambient

| Full review
The price is a little crazy. You need to spend about $300 to get up and running, which is a lot of money for what you get. That includes a Fire TV Stick that starts at $40, the Fire TV Recast which starts at $229 and an HD Antenna for about $25.
- CNBC

November 29, 2018 | Full review
If you're using Apple TV or Roku or Android TV or something else, then the Recast is not for you. It just won't work. That's a big limitation.
- Cord Cutters Patrick Ward is the editor-in-chief of High Speed Experts, a broadband connectivity-, search engine- and IT-industry education blog that empowers consumers by open-sourcing information about tech services. He earned his bachelor’s degree in commerce with an emphasis on communications at the University of Sydney. His expertise spans the digital, emerging tech and telecommunications fields. An Overview On DVRs

Back in the old days of cable TV — and by “old days,” we mean the mid-2000s — the role of the DVR was simple. The name stood for digital video recorder, and that’s what it did. It recorded video from your cable television to an internal storage device, allowing you to pause, rewind or record live television.

When it was first introduced, this was revolutionary. You could skip commercials! Pause for bathroom breaks! Make that must-see show wait until you were good and ready! The convenience was so great that cable and satellite providers started providing DVR service as part of their basic subscription, and most still do. People tend to use their provider’s service because it’s hassle-free and easily compatible.

These days, basic DVR features can seem quaint for cord-cutters who rely primarily on streaming services for their entertainment. But the pendulum has begun to swing back, as streaming subscriptions grow pricier and people are starting to realize that OTA (over the air) TV is still free for those with a decent antenna. But how do we make those scheduled network shows fit our busy lifestyle? Re-enter the stand-alone DVR.

“It’s worth investigating higher quality DVRs than the one you get with your cable box, since the better quality and user experience can make the additional investment worth it,” Patrick Ward, editor-in-chief of the IT education blog High Speed Experts, says.

But where should you start?

“Before purchasing your DVR, check the speed of your internet service,” Ward advises. “DVRs are increasingly using internet bandwidth, particularly when it comes to streaming.” He suggests making sure you have service that offers speeds of at least 200 megabits per second (Mbps) — 1000 Mbps is even better — if you regularly stream content, use an ultra-HD TV such as a 4K TV and have multiple devices plugged in at once.

Then, look at the options you want.

“If you have an HD TV, it is worth investing in a DVR that can also record in HD or your recorded shows’ picture quality will decrease on playback,” Ward says.

Far from sitting idle, TiVo and the other pioneers of DVR technology have been incorporating new technology to make their services relevant even to those with a streaming package. Today, DVRs offer all the modern conveniences you expect. There are models, for instance, that act as an all-in-one media device, allowing you to grab and record shows from your antenna but also giving access to streaming services like Netflix and Hulu. You can search for shows across both live TV and applications, issue voice commands through either the remote or Amazon’s Alexa assistant and even skip commercials.

Additionally, you’ll want to consider other options, such as two-tuner operation.

“Standard DVRs can only record a show or watch a show, not both,” says Ward. “With a two-tuner operation, you can watch a show while recording an entirely different show — useful if you have an overlap of favorite shows on at the same time slot.”

Other DVRs are somewhat more stripped down, but the main thing to remember is that you won’t be able to do much with a DVR alone. Nearly all of them require a TV antenna to access OTA content, sold separately. And if you want that content to be in HD, you’ll need an HD antenna. For Amazon’s Fire TV Recast, you’ll also need an Amazon Fire player or Echo Show with an active account.

How they connect to your TV also differs. Most run connections to your antenna, then deliver shows to your TV through an HDMI or another cable. The Tablo Dual LITE OTA DVR is a bit of an outlier, running through your wireless router which then delivers content to your TV.

There may also be a subscription cost to figure in, ranging from a few dollars a month to nothing at all. Considering that some DVRs can even let you record and watch from tablets or phones while you’re away from home, it can be a great option for viewers who don’t want to miss a thing.