We looked at the top Nakiri Knives and dug through the reviews from some of the most popular review sites. Through this analysis, we've determined the best Nakiri Knife you should buy.

Update as January 4, 2023:
Checkout The Best Nakiri Knife for a detailed review of all the top nakiri knives.


In our analysis of 32 expert reviews, the TUO Ergonomic Handle German Nakiri Knife, 6.5-Inch placed 15th when we looked at the top 15 products in the category. For the full ranking, see below.

banner TUO CUTLERY NEVER STOP TUOING! = NEVER STOP EXPLORING! Pronounced in the plosive sound, the meaning of the word ‘’TUO’’ has direct connotations in Chinese which refer to “Exploring” So our mission is never stop TUOING. Since TUO cutlery was founded 20 years ago, we’ve lived by our “TUO” spirit! The belief that through constant exploration in production techniques and raw materials we have established standards above and beyond! We have drawn tremendous power from “TUO”. The power keep us pursuing innovation of TUO Cutlery for our customers. TUO Cutlery is not only a tool, but also a elaborate craftsmanship which embodies the recognition of our customers. TUO CUTLERY has obtained ISO 9001:2008 Certification, LEGB Certification, FDA Certification and Italian D.M.21.03.73 Certification with its advanced production technology and strict control of product quality. TUO CUTLERY participates in all kinds of famous exhibitions, We are looking forward to seeing you annually in February:✓FRANKFURT “AMBIENTE SHOW” . March:✓CHICAGO “INTERNATIONAL HOME + HOUSEWARES SHOW”. May:✓ CHICAGO USA the “NRA SHOW”. September:✓MILANO “HOMI SHOW”. September:✓MOSCOW “HOUSEHOLD EXP”. top RING H SERIES •The TUO Ring H Series Kitchen Knives looks classical and beautiful. It is characterized by Japanese AUS-10 67 Layers Super Premium High Carbon Stainless Damascus Steel, with exceptional High-end Touches. •The handle is constructed with G10 Material by CNC-Lathe, providing a contemporary look, excellent touch and balance for secure grip and ease of maintenance. •The excellent Sharpness and good Edge Retention make it so fast and easy to cut. RING H SERIES definitely gives every chef Top Cutting Performance and Versatility. FEATURES High-tech — CNC finish machining for a copper,ring in the handle, red&black G10, a full genuine exotic handle. Elegant –Classic and elegant visual appeal. Comfort — With octagonal shape offers maximum comfort & control. Japanese Steel– AUS-10 “high carbon Japanese stainless steel”, high quality steel for making professional kitchen knives. Stainless — Excellent corrosion resistance to keep any kitchen sparkling clean. Surface — Damascus stainless steel blade that combines elegance and high-performance Sharpness – -Optimal angle designed with 12-15 degree cutting angle, for superior performance and easy maintenance. 11 About our exploration TUO cutlery products adheres to the concept of “Quality Comes First”. We have professional design team with our own factory. Follow the spirit of exploring. Thus we participate the exhibition all around the world activity. You can see us in · ✓Frankfurt “Ambiente Show” in February; · ✓Chicago “International Home + Housewares Show” in March ; · ✓ USA “National Restaurant Association Show” in May; · ✓Milano “Homi milano SHOW” in September; · ✓Moscow “HouseHold EXPO” in Sepetember; gg About Ring-H Series Damascus Kitchen Knives ✓Supreme function meets stunning elegance. ✓Painstakingly crafted over 100 days using the highest quality materials. ✓Scalpel like sharpness at a staggering 12-15 degree angle per side. ✓Incredible Edge Retention at 62+ Rockwell. ✓Mosaic riveted – even further resilience. ✓Beautifully engraved. Performance and looks. ✓Tapered blade for minimal slicing resistance and non-stick properties. ✓Cleans easily. 1 1 1 The RING-H Series Nakiri Knife Handle ✓Military grade G10 handle for life-long durability ✓Highly impervious to heat, cold and moisture ✓Ergonomic handle for superior hand control, agility and comfort ✓Non-slip grip ✓Engraved end cap for further distinction ✓Intricate copper mosaic enhances beauty The RING-H Series Knife Blade ✓AUS-10 Japanese super steel core. The ultimate steel for the ultimate performance. ✓ Damascus sharpened under the ancient 3-step Honbazuke method and married to bleeding edge technology. ✓Tapered bolster provides a perfect ‘zero-balance’ balance, finger protection and gently encourages a natural and comfortable pinch grip ✓Rust/Corrosion resistant cladding means your knife will stay cleaner and last longer ✓Hand-polished spine enhances comfort across very grips. We care for you ✓When using please be careful for the Sharp Cutter Edge and eliminate direct hand touch. ✓Hand Washing is recommended, since it may damage the sharp blade or handle when putting it in dishwasher. ✓Clean the knife with soapy cloth after every use and keep it dry and safe. ✓After each use please store in a safe place, store away from children reach. ✓Hone the knife with Honing steel every 2-3 months to maintain its sharpness.

Julie Chernoff is a long-time member of Les Dames d’Escoffier (past president of the Chicago Chapter, and current co-chair of the LDEI Legacy Awards Committee), the Association of Food Journalists (AFJ) and the International Association of Culinary Professionals.

Chernoff is the dining editor of Better, a lifestyle website and print magazine. Her journalism started in the test kitchens of Weight Watchers Magazine. She holds a BA in English from Yale University and is a graduate of the California Culinary Academy. She has spent the last few decades styling, photographing, teaching, developing recipes, editing, thinking and writing about food. 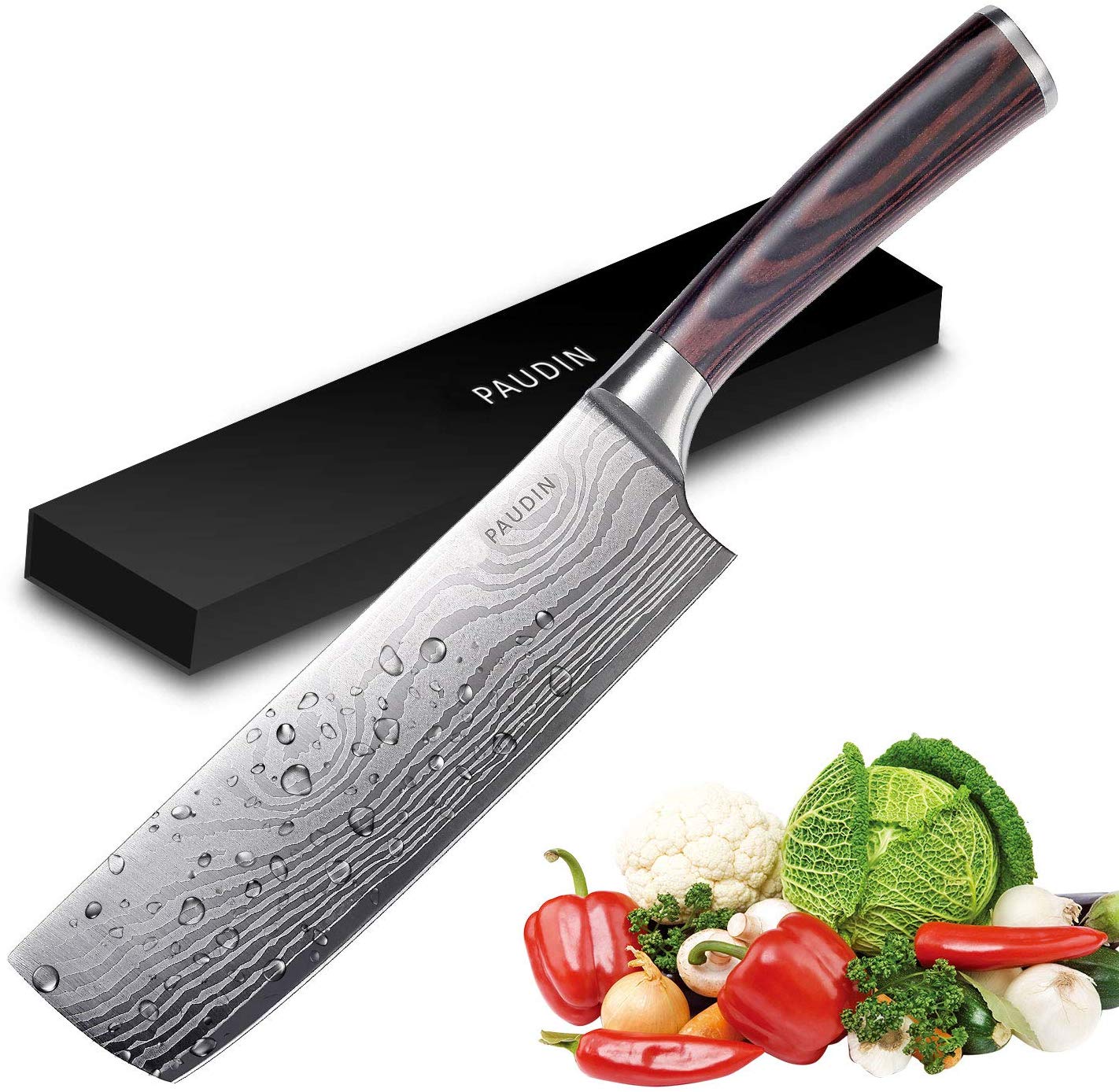 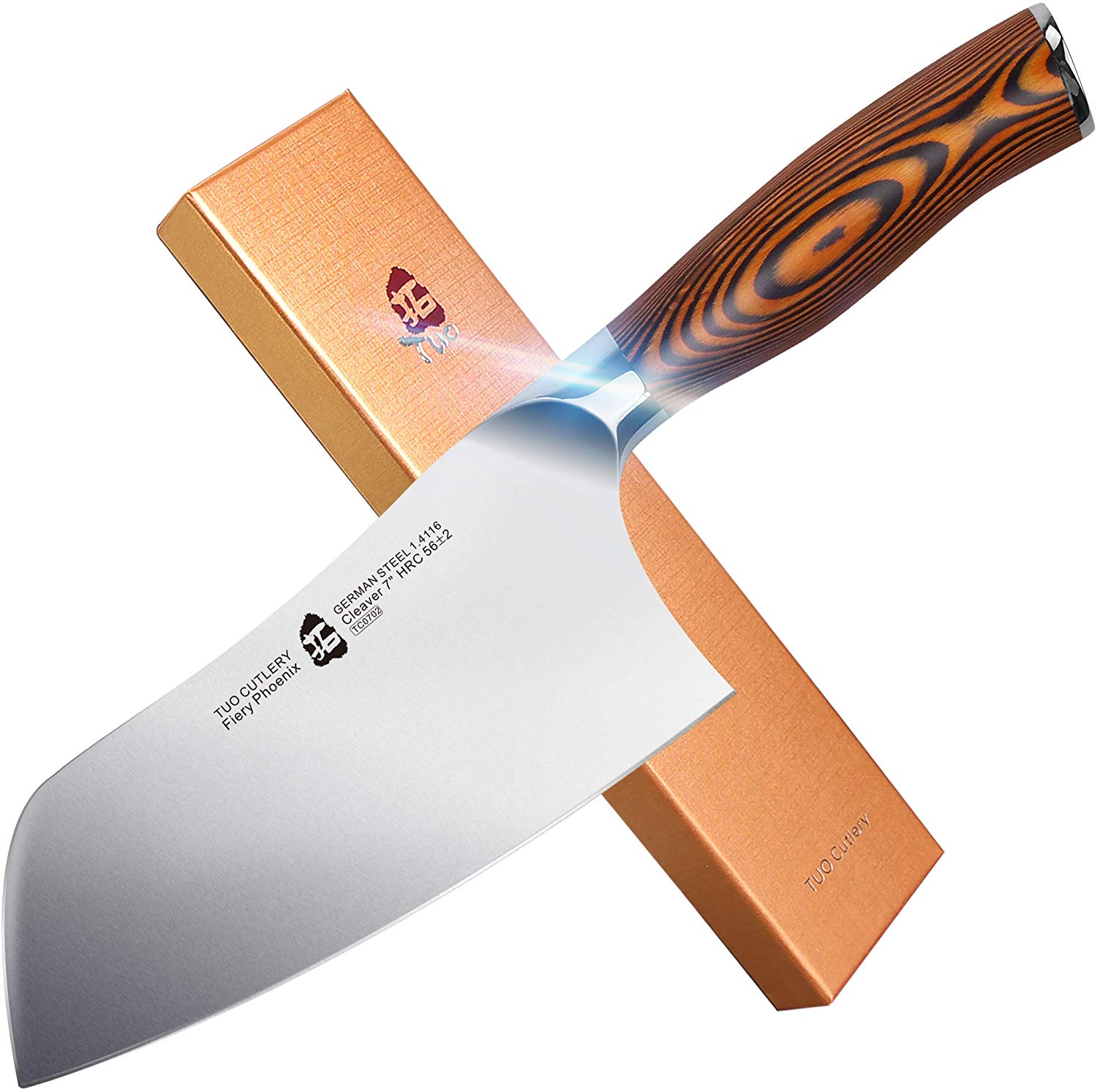 An Overview On Nakiri Knives

You don’t have to be a chef to benefit from using a professional-quality knife. In fact, even occasional home cooks can take their dishes to the next level by collecting an assortment of top-notch kitchen knives, such as a good nakiri knife.

A nakiri knife, also known as a nakiri bōchō or usuba bōchō, is a Japanese-style knife created for chopping vegetables. The thin blades are especially useful when precision is important. For instance, if you hope to slice even harder fruits or vegetables in a uniform thickness, a nakiri knife is the ideal kitchen tool. It is an effective knife for mincing, slicing, dicing or chopping most varieties of produce efficiently and consistently.

An added benefit of owning a dedicated vegetable knife such as a nakiri is that you eliminate the possibility of cross-contamination that could occur when a knife is used to slice raw meat and then accidentally utilized for chopping vegetables without a thorough cleaning first.

It is similar in appearance to a meat cleaver, with a straight blade and squared-off tip. This design allows the knife to easily cut straight down through vegetables to the cutting board or surface without the need to push, pull or “saw” horizontally through the ingredient.

A nakiri knife might have a traditional Japanese handle or a European handle. Japanese knife handles are often made of wood, which requires a bit more maintenance than a metal handle. For instance, like other wooden kitchen utensils, a wood-handled knife will need occasional oiling and special cleaning.

The blade on a nakiri knife is quite thin and typically ranges between 165-180mm and the blades are almost always beveled on both sides.

Because of its tall, symmetrically sharpened, razor-thin blade, the knives slice through vegetables with such ease. You do not need to rock the blade or worry about smashing delicate produce, as the blade glides through smoothly and evenly.

“Given its straight edge, the Nakiri is not meant to replace the rocking motion of the Western Chef’s knife,” says Julie Chernoff, dining editor of Better, a lifestyle website and print magazine, and our in-house kitchen tool expert. “You can chop fluidly with the Nakiri without rocking. It’s known for making clean cuts, and won’t damage or smoosh the veggies.”

A nakiri can be more gentle on the user than other knives, as well. Not only will you easily avoid rapping your knuckles on the cutting board using a nakiri knife to chop veggies, but you will also find yourself slicing and dicing like a pro because these knives are so easy to use.