We looked at the top Stick Vacuums and dug through the reviews from some of the most popular review sites. Through this analysis, we've determined the best Stick Vacuum you should buy.

Update as September 27, 2022:
Checkout The Best Stick Vacuum for a detailed review of all the top stick vacuums.

If you're looking for a lightweight stick vacuum that doesn't lack power, this is the model for you. In fact, this vacuum can be used as a stick vacuum, handle vacuum or a stair vacuum. Available colors include blue, purple, lime and black.


In our analysis of 76 expert reviews, the Bissell Multipurpose 3-In-1 Stick Vacuum placed 1st when we looked at the top 16 products in the category. For the full ranking, see below.

| Full review
Very light at only 5 pounds and versatile enough to clean stairs and upholstery thanks to the detachable wand.
- Best Cordless Vacuum Guide

December 3, 2018 | Full review
This fits the bill perfectly. This little machine is not noisy and picks up great.
- New York Mag

The power cord is only 15' long. Small vacuum head means it takes longer to cover a large room.
- BestReviews

| Full review
No switch on the handle – you’ll have to bend over and flick the switch on the handheld part of it. The lever that holds the cord does not fold so you’ll waste a bit of time unwrapping the cord from it.
- Best Cordless Vacuum Guide

December 3, 2018 | Full review
The cord on this unit could have been longer.
- New York Mag 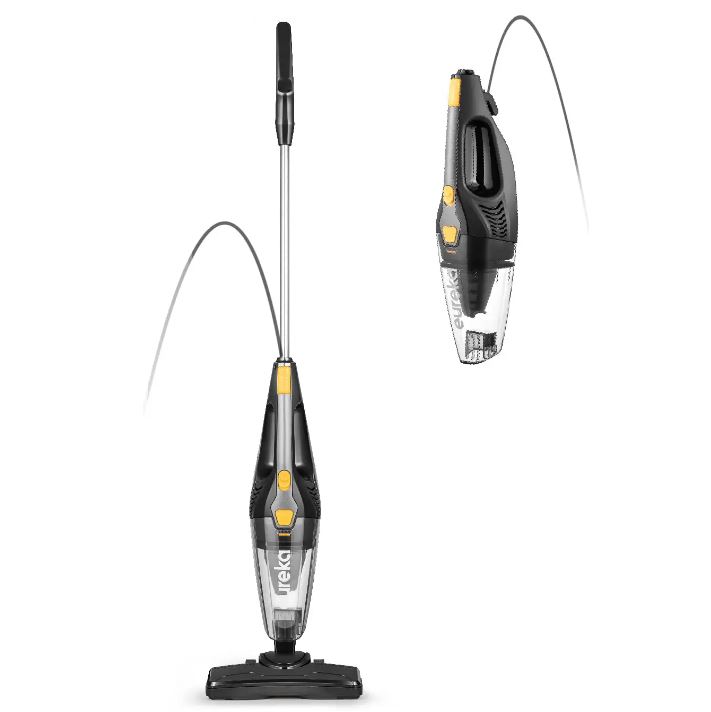 An Overview On Stick Vacuums

As hardwood floors become increasingly sought after in American homes, the stick vacuum has emerged as the cleaning solution of choice for many. A slimmed-down sister of the old upright vacuum, it does the hard work of tidying up floors without that bulky bag or the bulky profile. The first stick vacuums could store easily in even the smallest closet, and while they couldn’t boast the pickup power of the big uprights, they worked just fine for tile or hardwood. They could also handle tiny crevices and corners with greater agility.

Vacuum technology has come a long way in the last couple of decades, to the point where the best stick vacuums are perfectly capable of picking up dirt from just about any surface — rugs, carpets or upholstery.  Most models now can toggle between modes for cleaning carpets or bare floors. The main difference is typically a stiff-bristled rotating brush, which helps loosen deep-seated carpet dirt. On wood floors, it not only scatters that same dirt but can sometimes harm sensitive surfaces, so choose your setting accordingly.

The initial draw of the stick vacuum — portability — has likewise improved. Even budget models are now cordless, allowing you the freedom to clean floors, ceilings or patios without worrying where the plug is. Battery life is always a concern, but just mount it for a recharge and you’re ready to go again.

Many modern stick vacuums don’t even need to be confined to the house, thanks to their modular sensibility. Vacuums like the Shark Rocket Ultra-Light Corded Bagless Vacuum are light enough in their normal configuration, but you can also detach the vacuum from the floor cleaner. Snap on one of a series of attachments, and you’ve got an effective handheld cleaner that can tackle car interiors or other tough-to-reach areas.

Finally, one of the same things that make stick vacuums so sleek also makes it more sanitary. Instead of the bag container of the classic upright vacuum, stick vacuums trap the dirt they capture in a cup — typically near the handle at the top. This container isn’t as roomy as that of an upright vacuum, meaning you’ll need to empty it more often. But when you do, it will generally mean less mess. Some vacuums double down on that cleanliness with a HEPA filter that traps tiny particles and allergens, but the thickness of that filter can reduce suction power in budget models.