The jumpsuit trend has been around for years now, and it isn’t showing any sign of abating. And while it may take a while to find the perfect jumpsuit  — the one that washes well, doesn’t need to be ironed and is super comfy and stylish — once you’ve got it, you’ll never want to wear anything else.

Just ask the flight attendants of the world. Thanks to these world-travelers, one particular jumpsuit has caught our eye.

And it’s not a designer buy; it costs $23.99 from Amazon. It has an off-the-shoulder style and an elasticated waist — and it even has pockets. 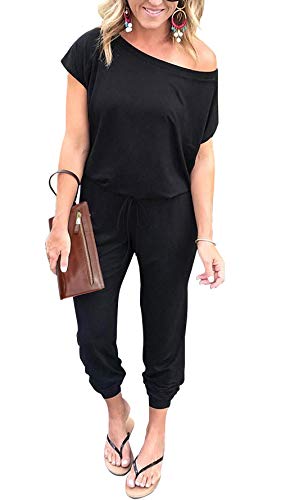 According to The Strategist, almost 400 flight attendants own the so-called “traveling jumpsuit,” since it was first featured in a post in a private Facebook group. The group’s moderator Jennifer Nors believes jumpsuit fever really began in early August when one flight attendant included it in a post about her latest Amazon purchases. “Then, out of nowhere, someone else posted they got the same one, and from there our entire group blew up,” Nors told The Strategist. “The more people posted pictures, the more people requested the link to buy.” Soon, the basic black jumpsuit took over the Facebook group, with flight attendants sharing pictures of themselves wearing the garment everywhere from the beach to a sports game.

By September, demand was so great that the jumpsuit was on back-order, and some people had to wait several weeks for delivery, The Strategist reports. Clearly, some were worried it wouldn’t come back into stock, and ordered several. Flight attendants aside, Amazon customers are going crazy for this jumpsuit — which is also available in brown, navy, wine red, green and dark green, if black doesn’t do it for you.

“This jumpsuit is so versatile!” wrote one reviewer. “It is so comfortable and feels like I have my pajamas on!”

“So happy I ordered this!” wrote another. “Quality of both material and workmanship is great — it’s so flattering!”

How to remove gel nail polish at home

Fitness products to help you stay in shape at home

Hair color at home: How to cover your gray hair at home

These comfortable slip-on sneakers have over 3,500 reviews on Amazon

These bestselling $15 sunglasses have over 9,000 reviews on Amazon